Once, the galaxy was ruled by a vast elven empire called the Elader. These elves saw that the moral character of the empire was rapidly crumbling, and an ambitious member of their temple devised a ritual to allow their gods, the Divines, to walk the galaxy side by side with 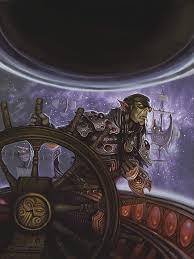 their followers. The ritual worked, mostly. The Divines did come to the Galactic plane; however, with them came all of the demons and devils. This sparked millennium of wars that only make a drastic change at the end of the last major war when both devils and demons managed to confine all of the Divines on their homeworld, the Elader capital of Godsholme, then landed on the planet and killed everything, destroying the planet. This event, called the Smiting, also caused every major temple of the Divines to be destroyed instantaneously, with their clergy killed or driven mad. Forty standard years have passed, and an old dwarven prophecy predicts enough war, greater than all the rest, to be coming soon. Armies are gearing for war, it appears all but inevitable…

Forty years have passed since the Smiting, and everyone in the galaxy is aware that yet another war, named in prophecy as the Blood War, is on the horizon. All of the empires are gearing for war, and it almost seems as if nothing can stop it…

Important Information for Players
The list of playable races can be found here. This list isn’t exhaustive, it is all of the Player’s Handbook races in addition to any homebrew race already statted out and given some testing. Players are more than welcome to propose their own race and work it out with the GM.
The major governments, empires, and movers-and-shakers is listed under Polities of the Galaxy.
Additional information about the setting as a whole can be found in the Wiki. The Adventure Log relates to one group currently playing in this setting, and is following their progress.

I'm sorry, but we no longer support this web browser. Please upgrade your browser or install Chrome or Firefox to enjoy the full functionality of this site.